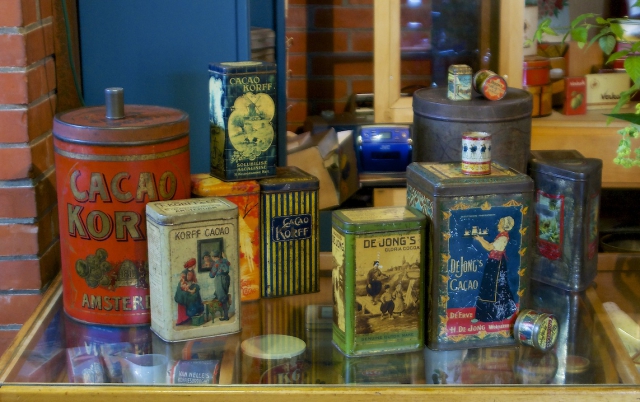 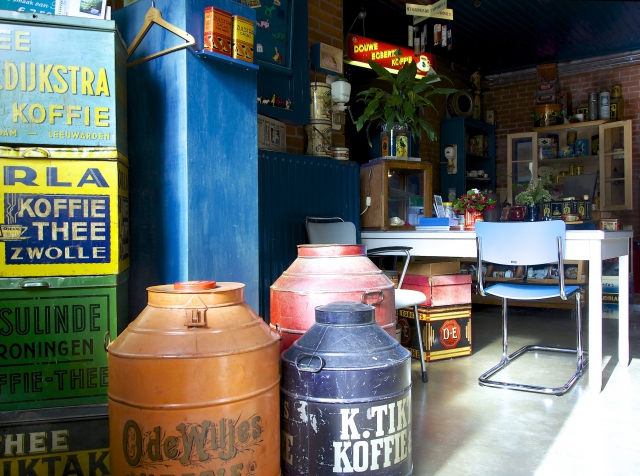 A little gem on the Groninger Hogeland, where you will find a sense of recognition and perhaps a feeling of nostalgia. But when you take your time you will find that the tin boxes have a story to tell that reaches far beyond your first impression into the ‘kitchen of our society’.

It is this story that makes this collection unique. On this page we will give you a short impression of what you can expect to see in Het Behouden Blik.

This impressive collection of Dutch coffee, tea and cocoa tins exists of roughly 4.500 objects which can by no means be all displayed at once. That is why we present a different Seizoensblik every three or four months of the year in which we focus on a part of the collection that is not usually on display. The collection started as a private hobby of our director Carin van de Wal. The museum first opened its doors to the public in 2001 and in 2010 the Foundation Het Behouden Blik was established. 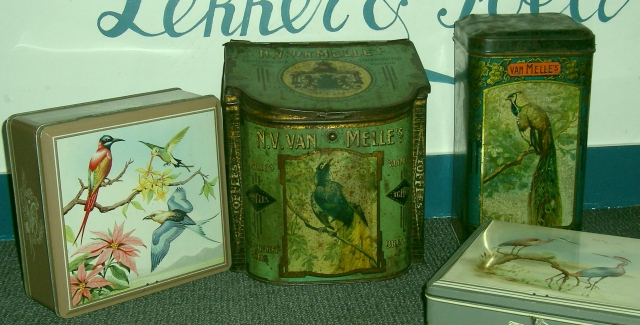 The tins are impressive, extremely decorative and are produced in complex technical shapes. The company is well known for its sugar drops, ice bonbons and has expanded through its toffees. 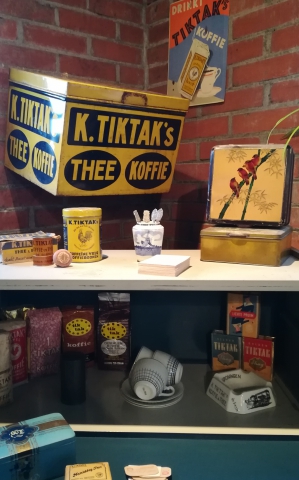 The Groninger coffee company K. Tiktak was established at the Dampsterdiep in the city of Groningen. It was well known for its afternoon tea in the bright yellow package decorated with the Tiktak rooster. Are you enjoying a cup of coffee or tea in Het Behouden Blik, then you will definitely recognize the special taste of this last remaining coffee company of Groningen origin.

The Tiktak shows were the company’s unique advertising instrument. The shows were presented from 1949 untill 1970 in the provinces of Groningen, Friesland and Drenthe. An original programm of one of these shows is on display.

Jean en Joop Kok (and family) arranged a different theatre show each year in which the top artists of that time, performing at the Amsterdam and Rotterdam theatres, would perform for the northern public. The company’s saving system, the so-called Tiktakjes, made it possible for the public to save up for a free ticket.
A perfect opportunity for a special night out at your local theatre!

Quite a number of the products of Egbert Douwe, founder of the Douwe Egberts company can be seen in the collection of Het Behouden Blik. A number of these items have been donated by the Sara Lee company in Utrecht. The Flip and Flap game sheet is one of those items, issued around 1930 by Daan Hoeksema, for which we are very grateful indeed.

Kleurenvlucht (1948) and the album on the Dutch East-Indies were the first albums, followed by Australië (1954). A series that was completed in 1965 with the album Griekenland.

Het Behouden Blik has a lot of items on display connected with the different saving systems that the companies had set up in order to attract their customers. The Dutch saved up little flags, collected points, pasted them on collecting cards in order to treat themselves to nice gifts, or to hand them over in order to support the local sports club.

The company that truly worked this out to perfection is Douwe Egberts. They set up their own gift shop where you can still get articles for free in return for the points you saved up. 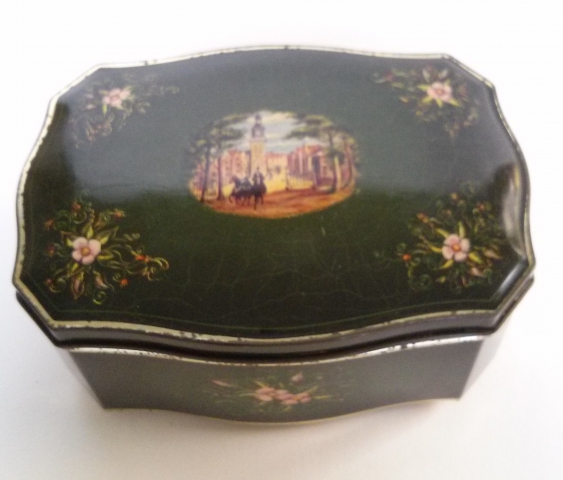 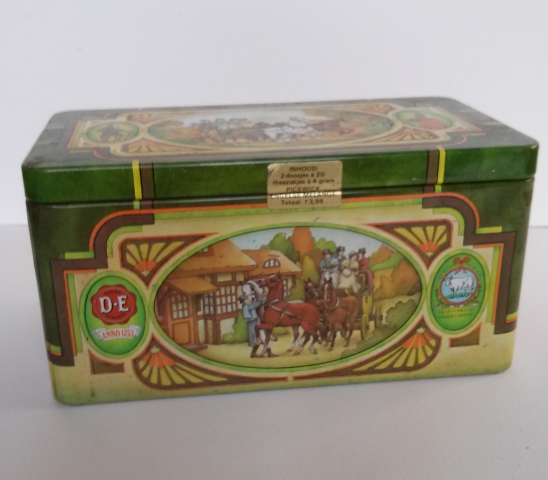 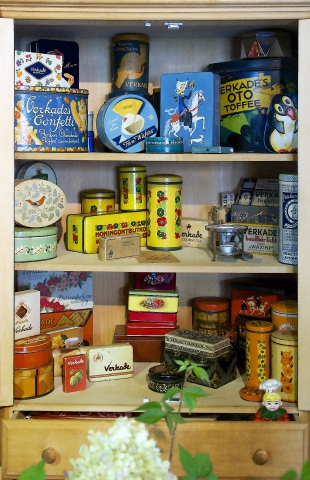 Everone knows or recognizes them. The yellow tins by Verkade with the Indian Cress.

Designed by Cees Verkade they presented the company with a very successful advertising article for over 25 years. These tins are always original, no reproductions have ever been made. The signature in the bottom of the tin will vary according to the production period.

Of course, Het Behouden Blik will also offer you a glimpse into the very well known Verkade picture albums. The oldest one in the collection dates back to 1903 and is still in perfect condition. The Verkade nightlights can also be found in the collection. They date back to a period in which it was okay to just be happy.

Everybody recognizes the red/yellow tins made by Van Nelle. Designed by Jac. Jongert they dominated shop decors and buildings for years. Van Nelle not only spent a great deal of attention, care and money on packing their products, but also decorated the public space with high quality advertising products.

It is good to remind oneself that when the red/yellow tins where first introduced in 1930 the public did not like them at all and thought they were far too modern looking. The public needed some time to get used to the transformation from art nouveau and jugenstill into the so called nieuwe zakelijkheid.

Het Behouden Blik also offers you the opportunity to once more indulge yourselves in the stories of the famous gnome Piggelmee.

We wonder, who made who climb to unknown heights, Piggelmee Van Nelle or just the other way around? 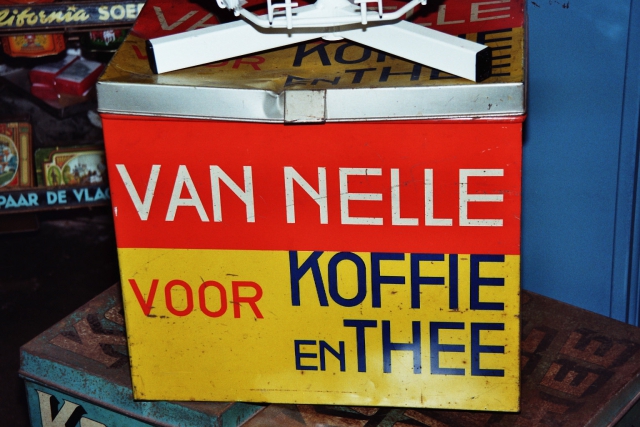 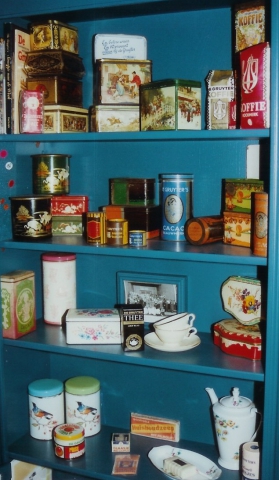 The tin’s of the supermarket company De Gruyter were the first tins in this collection.

In the early 1970’s my grandmother gave them to me. She was very much in favour of progress and changed to the storage cans in the bright colours purple, orange, green and brown that have become almost a symbol of that era.

You will find a large collection of De Gruyter tins, and packages, the collectible chinaware that was issued by De Gruyter and the many small gifts that were offered each week as the famous “Candy of the week”.

Are you familiar with the slogan: ‘And better products and 10% only at De Gruyter?’

A total of three books have been published on the ‘Droste’ company. All three are available in the collection of Het Behouden Blik. The book by Jan Feith, with illustrations by Jo Spier is especially interesting.

It is fair to say that all over the world people are familiar with the nurse portrayed on the packages and tins of the Droste cocoa. The cardboard chocolate boxes can still be found on a garage sale or fair every once in a while. Het Behouden Blik has a nice collection of boxes on display.

On April 4th 1828 his son Coenraad Johannes van Houten was issued the patent for the process of obtaining soluble cocoa in powder form by King William I.

Van Houten´s Cocoa was way ahead of its time when producing the advertising slogan:

‘Van Houten’s cocoa
The best and most economic in use´.

Take a closer look at the design of the tins and the advertising posters. They were designed according to the idea’s of the era they belong to and are without exception produced with great care by well-known artists. 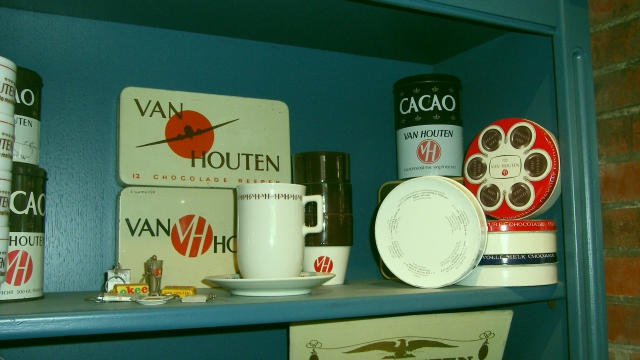 We have only given you a short impression of the collection that is on display in an ever changing set up. More information can be obtained from the Seizoensblikken, or from a visit to the museum in person.